The Five Best Movies About Finance – A Contrarian Perspective

The Five Best Movies About Finance – A Contrarian Perspective 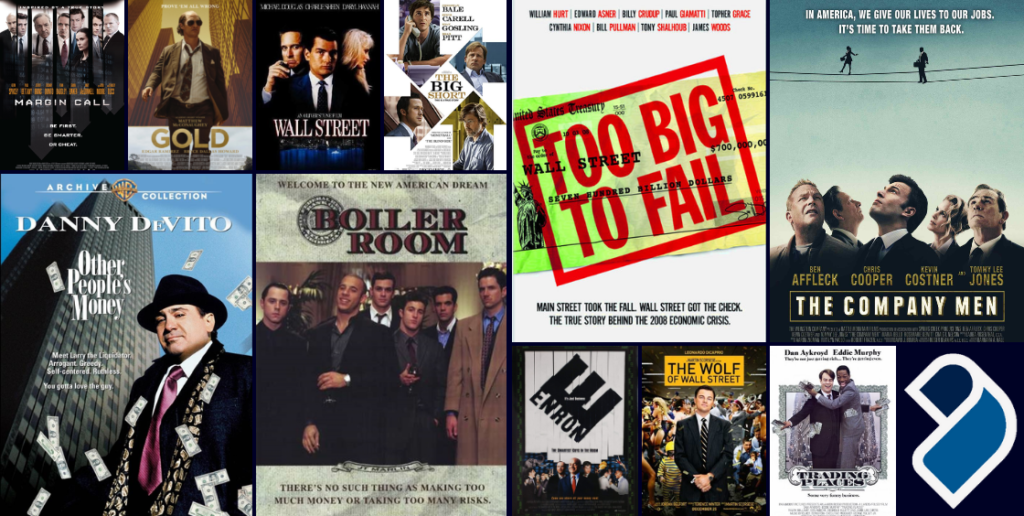 Lust for money might be the root of all evil — but it’s also the basis for some incredible films. Here’s a top-shelf tour of the financial world, from the comfort of your couch.

Category – Raiders of the Hostile Takeover: Other People’s Money (1991)

Hostile takeovers were big movie fodder in the ‘80s and ‘90s, from the iconic, mercurial mentorship between real-life father and son Martin and Charlie Sheen in Wall Street, to Richard Gere’s unfulfilled corporate raider character in Pretty Woman. But the best (and most underrated) cinematic examination of a corporate raid is Other People’s Money, with Danny DeVito as pitch-perfect Larry the Liquidator against Gregory Peck’s gentle, old-school Jorgy, president of a declining Rhode Island family business.

After Jorgy makes a heartfelt plea at a shareholders’ meeting, extolling the virtues of traditional local businesses with a speech that would be right at home in It’s a Wonderful Life, Larry gets up amidst boos and hisses to deliver an eviscerating rebuttal and convince the shareholders to give him a controlling interest. Newer, cutthroat capitalism wins — until Jorgy’s stepdaughter (and Larry’s love interest) Kate comes up with a scheme for the company to survive, in a final scene Roger Ebert’s despised. Nonetheless, it’s an illuminating examination of the costs of corporate progress.

Category – What the Hell Happened with the Great Financial Crisis of 2008: Too Big to Fail (2011)

In 2009, New York Times financial columnist Andrew Ross Sorkin published Too Big to Fail, a thorough chronicle of the 2008 financial system meltdown that caused the Great Recession. HBO’s 2011 movie adaptation of the book lays out the executive failures at the highest levels of government and finance that led to the collapse of Bear Stearns and Lehman Brothers, before the United States Treasury Department bailed out AIG with an $85 billion loan.

Of course, despite Congress’ efforts to pass the Troubled Asset Relief Program and prevent a recession, we all know one happened anyway — and performances from powerhouse actors such as William Hurt, Paul Giamatti, Bill Pullman, and Tony Shalhoub illustrate why: the egos at the top of the system are as inflated as the American housing market.

Wall Street might be runner-up to Other People’s Money in the corporate takeover category, but Gordon Gekko spawned a whole genre of imitators expounding upon his greed-is-good ethos. Chief among them: Boiler Room’s Seth Davis, the teenaged son of a federal judge who goes from running an illegal but generally harmless college casino, to working for an allegedly legal but financially devastating chop shop brokerage.

The parallels and comparisons are obvious, of course: dishonest brokerages just provide a casino for the wealthy and well-connected to con rubes without consequences. And besides the fun of watching how Seth extricates himself from criminal charges, there’s also the delight of watching pre-superfamous Vin Diesel and Ben Affleck in supporting roles.

Runner-up: The Wolf of Wall Street

Every prospector knows there’s gold in them there hills — as well as the frequently backbreaking effort required to extract it. Mimicking the Bre-X scandal and others of the time, Matthew McConaughey plays Kenny Wells, an enterprising prospector seeking golden fortunes in the Southeast Asia. He and his less-than-honorable partner Michael Acosta, skillfully played by Edgar Ramirez, ride from bust to boom to bust all in 120 minutes. Chaos and backstabbing ensue. The market for commodities is just as wild and complex after the near-total breakdown of society — some things never change.

Category – Reminder that You’re More Than Just Your Job: The Company Men (2011)

Ben Affleck might have top billing, but the real heart of this story about a large corporation weathering the fallout of the 2008 financial crisis is Chris Cooper, playing a character who ascended from the shipbuilding factory floor to senior corporate management. Once he’s laid off (by his mistress, who works in HR), he finds himself in an all-too-common bind: too old to start over, too young to retire. It’s a humbling lesson on building your life around something other than your job, and the salary that accompanies it.

Runner-up: Enron: The Smartest Guys in the Room

No list of films about the financial system is complete without mentioning the most critically acclaimed money movie in recent memory. Between the factual accuracy, high-caliber acting and informational asides, this movie deserves credit for educating more regular Americans about the 2008 financial crisis than any Wall Street Journal article or C-SPAN segment could.

Ryan George is the Chief Marketing Officer at Docupace. He is responsible for the company’s brand awareness, early-stage sales pipeline, content strategies, customer and industry insights, internal and external communications, design, and events. George actively engages in leadership roles in both the financial services and marketing communications communities. He is a member of the Forbes Communications Council, an invitation-only, fee-based organization of senior-level communications and public relations executives, the CMO Council and the CMO Club.

Want to read more
from our thought leaders?

How Can Docupace Work for You?

Schedule a Demo
We use cookies on our website to give you the most relevant experience by remembering your preferences and repeat visits. By clicking “Accept”, you consent to the use of ALL the cookies.
Cookie SettingsAccept
Manage consent

This website uses cookies to improve your experience while you navigate through the website. Out of these, the cookies that are categorized as necessary are stored on your browser as they are essential for the working of basic functionalities of the website. We also use third-party cookies that help us analyze and understand how you use this website. These cookies will be stored in your browser only with your consent. You also have the option to opt-out of these cookies. But opting out of some of these cookies may affect your browsing experience.
Necessary Always Enabled
Necessary cookies are absolutely essential for the website to function properly. These cookies ensure basic functionalities and security features of the website, anonymously.
Functional
Functional cookies help to perform certain functionalities like sharing the content of the website on social media platforms, collect feedbacks, and other third-party features.
Performance
Performance cookies are used to understand and analyze the key performance indexes of the website which helps in delivering a better user experience for the visitors.
Analytics
Analytical cookies are used to understand how visitors interact with the website. These cookies help provide information on metrics the number of visitors, bounce rate, traffic source, etc.
Advertisement
Advertisement cookies are used to provide visitors with relevant ads and marketing campaigns. These cookies track visitors across websites and collect information to provide customized ads.
Others
Other uncategorized cookies are those that are being analyzed and have not been classified into a category as yet.
SAVE & ACCEPT